Last time we too a closer look at CPUIDs and EAX values to help us workaround installing ESXi 7.0 into a VMware virtual machine (VM) hosted on physical hardware that contains an unsupported CPU.

If you’ve not seen that post, catch up now. It’s a great read.

As mentioned, this post is part 3 of a multipart series. Find the other parts here:

To recap, the ESXi installer uses the CPUID instruction to identify the CPU(s) installed in the system. From the value obtained the user is told that their processor is either:

USB is Your Friend

We already know that we can install ESXi 7.0 into a modified VM. Next step is to pass a USB stick through to the VM and install ESXi onto that. We can then take that same USB stick and boot a physical server from it.

As we saw from part 1, once ESXi 7.0 is installed, it appears to boot perfectly fine on Westmere processors without a CPU mask being required…

Create a VM for ESXi Installation on USB

Create an ESXi VM in VMware Workstation the following specifications:

Don’t forget to mount your ESXi 7 installer iso too!

Close VMware Workstation and open the vmx file in a text editor. I use Notepad++. Find and delete all scsi entries: 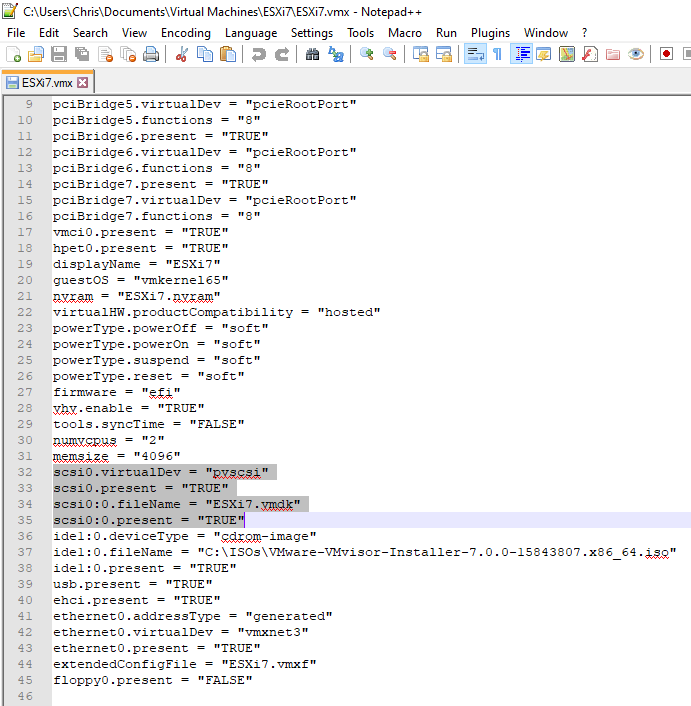 Paste in the following CPU mask: 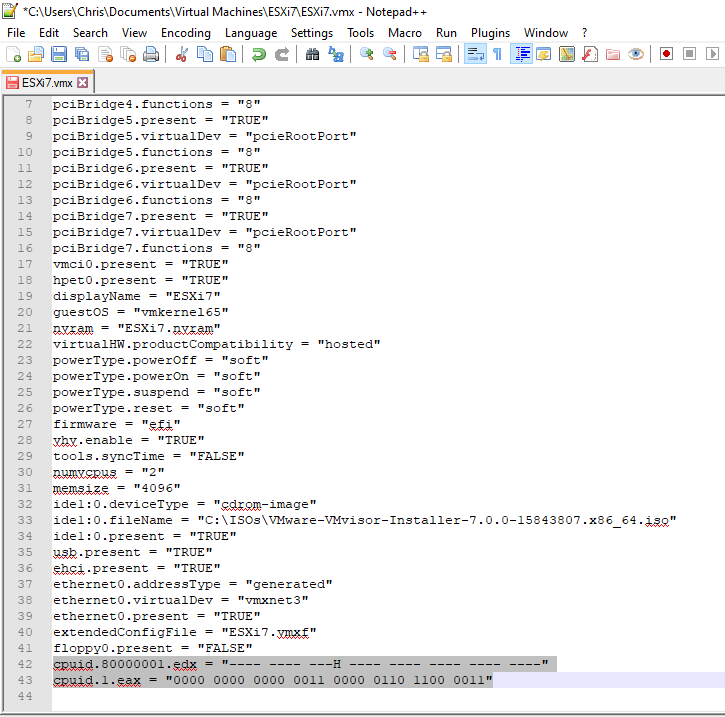 Save and close the vmx file and open VMware Workstation. Next, boot the VM. Whilst the VM is booting, connect the USB stick to the VM:

Once connected proceed to install ESXi onto the USB stick: 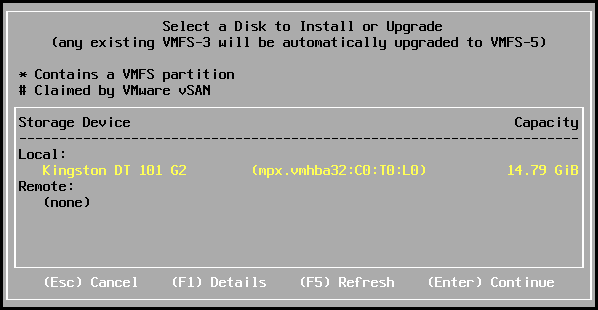 Once done, power down the VM and remove the USB stick. Ready to test!

Should you have issues with creating the required VM, you can download a copy of my ESXi7 here: ESXi7.zip
Import into VMware Workstation and install ESXi onto your USB as detailed above.

Follows is my testing of ESXi 7.0 on my Dell R710 fitted with westermere-ep Xeon CPUs. Excuse the picture quality! (I didn’t have enough time to get Java working for the iDRAC)

Insert the USB into the server, F11 for one-off boot menu, select the Usb stick and here we go… 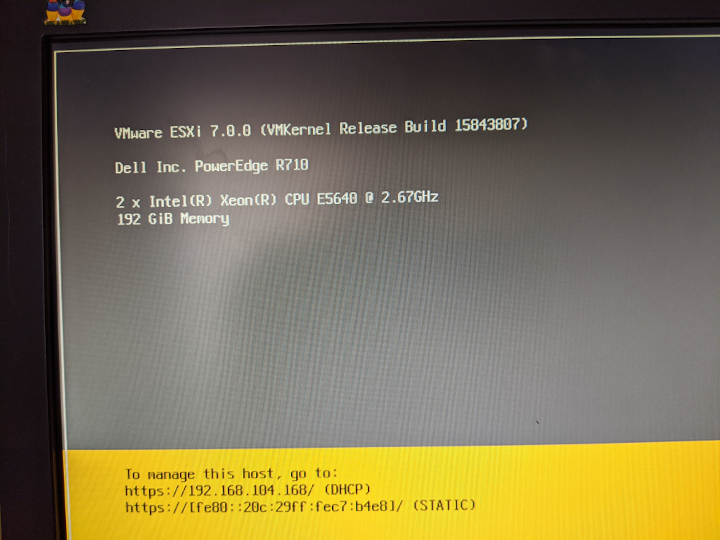 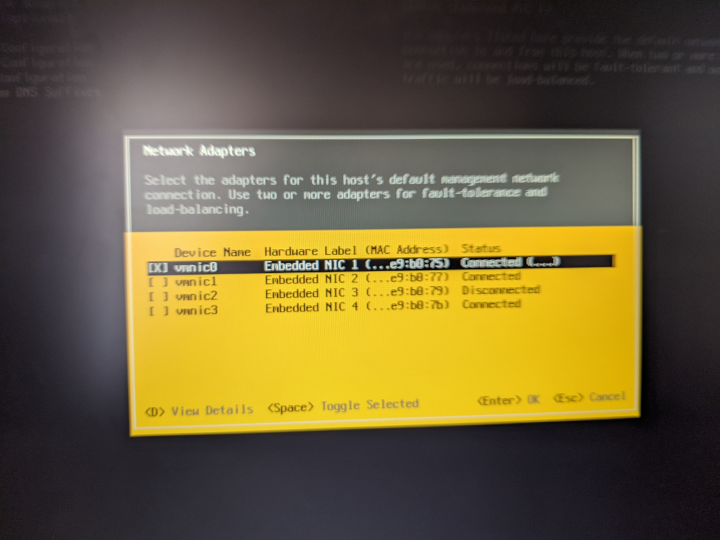 Yep we have network connectivity. All four built in Broadcom NICs detected. Not often I say this, but yay for Broadcom… 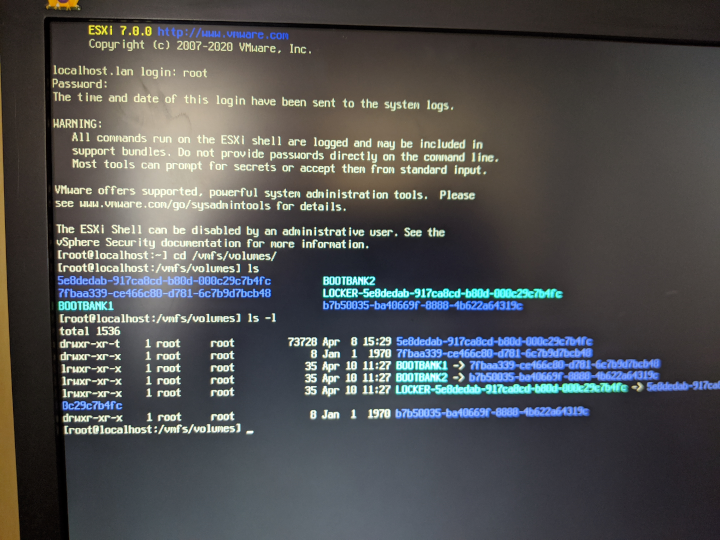 Hmm that’s strange. In previous ESXi versions we don’t usually see the bootbanks under /vmfs/volumes No matter. What are instantly distinguishable by their absence are the data stores.

But I digress. That’s a job for another time and post.

After a reader posted a link to Allowing Unsupported CPU’s on ESXI 6.7 by Daniel Lumby, I started having a poke around the ESXi 7.0 install iso and looking in \UPGRADE\PRECHECK.PY file, I spotted the following: 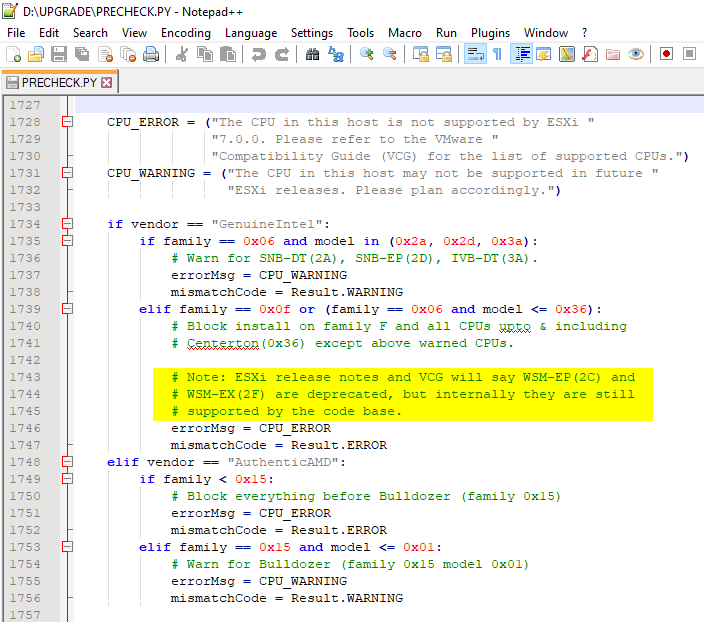 Note: ESXi release notes and VCG will say WSM-EP(2C) and WSM-EX(2F) are deprecated, but internally they are still supported by the code base.

That will be why servers with Westmere CPUs boot and run fine then!!!

Our task here was to see if could use what we learnt in parts 1 and 2 of this post series to create a modified VM and then use that VM to install ESXi 7.0 onto a USB stick

We then used that USB stick to boot a physical server. The server booted and was seen on the network without issue. Given a better choice of storage controller, we could even have mounted our datastores and potentially fired up a test VM for the LOLs of it.

We even found courtesy of comments left by VMware themselves that Westmere CPUs are supported by the ESXi code base.

Possibly. Given the current lock-down in the UK, my “production” Dell R710 Is the only server I have access to whilst working from home. Given that my R710 hosts my pfSense VM and further testing requires shutting down all internet access from home, getting downtime on it is a little tricky at the moment. That said, I’ve a couple of ideas for incorporating a megaraid_sas driver into ESXi 7.0.

We also need to look at how to upgrade our USB stick when the first ESXi 7.0 patch drops…