Last time we looked at a workaround to install ESXi 7.0 into a VMware virtual machine hosted on physical hardware that contains an unsupported CPU. If you’ve not seen that post, catch up now. It’s a great read.

As mentioned, this post is part 2 of a multipart series. Find the other parts here:

To recap, the ESXi installer uses the CPUID instruction to identify the CPU(s) installed in the system. From the value obtained the user is told that their processor is either:

CPUID and the EAX Value

The CPUID instruction returns processor identification and feature information held in the EAX registers of the CPU in the system.

You can read more about the construction of the EAX value at x86 Instruction Set Reference - CPUID and CPUID — CPU Identification.

As luck would have it, Intel publish CPUID’s of their processors (or Processor Signatures as some of their literature calls it) in Intel Architecture and Processor Identification With CPUID Model and Family Numbers and Intel Xeon Processor Scalable Family Update March 2020.

Let’s put that aside for the moment and single step through determining the CPUID of processor.

Simple. Check in Configure - Hardware - System of the host system that is to run the ESXi 7.0 VM. For example:

Next, use the search function of CPU-World to obtain further information on the processor model found in step 1. For example: 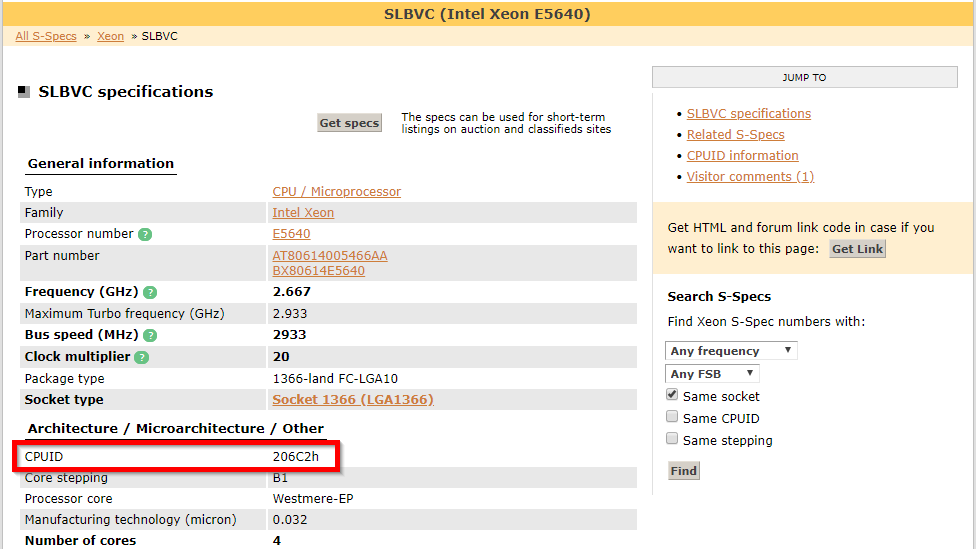 Lets check the Intel Architecture and Processor Identification With CPUID Model and Family Numbers, paper from above and sure enough, we can see that Gulftown and Westermere-EP CPU’s have and CPUID of 0x206Cx (the “0x” prefix = hex notation, “x” suffix = variable): 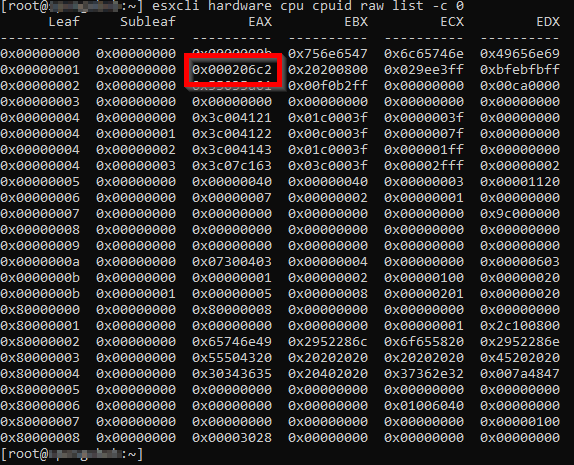 A confirmed CPUID of 206C2 padded with three zeros! Nice

Converting a CPUID to an EAX Value

As we saw in Workaround ESXi CPU Unsupported Error - Part 1, an EAX number must be entered into the vSphere CPU Identification Mask setting in binary: 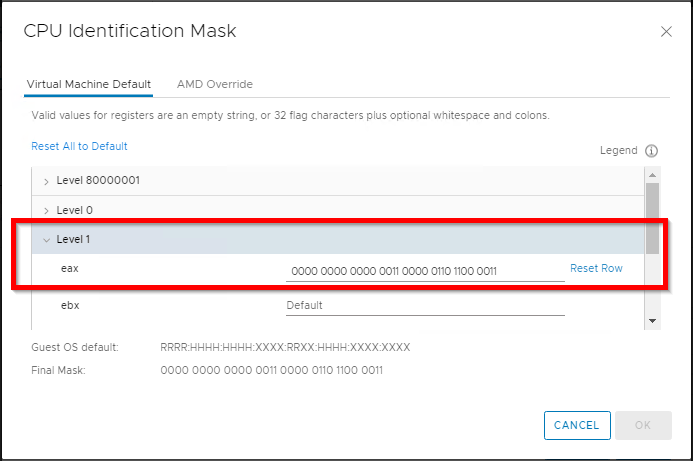 Conversion is easy. Use an online hexadecimal to binary converter.

Again, using the three zero padded 000206C2 example from above:

Pulling It All Together

So I present to you a list of processors, their CPUIDs, their binary EAX numbers and the result of installing ESXi 7.0 into a VM configured with the corresponding EAX number.:

Eagle eyed readers will recognise that in Part 1, we used the Haswell processor EAX value to enable ESXi 7.0 installation.

*As server used for testing is Intel CPU based, I’m unable to test EAX values for AMD CPUs.

The environment used for the above testing:

In this post we looked at CPUIDs, how to obtain them from online sources and how to find them by querying physical hardware. From there we looked at how to convert a CPUID into a binary EAX value.

Finally, we applied the generated EAX values to a VM and ran the ESXi 7.0 installer, with results as detailed above.

Next time, in part 3, we’ll look at using what we’ve learnt in parts 1 and 2 in the physical world. Stay tuned..!