Regular readers will know that at in part 3 of the Workaround ESXi CPU Unsupported Error series (Check the series out), during my very limited testing I found that whilst my Dell R710 home server was booting and running ESXi 7.0 quite happily; with just the one exception…. No datastores.

I followed that discovery up with a tentative - yet ultimately unsuccessful attempt to re-add support for the Dell PERC H700 array controller into ESXi 7.0. Read about my exploits in ESXi 7.0: The Missing PERC(s), Lost Control-er. What follows is an update to that post.

At time of writing this post, it has been just over four and a half months since my original missing PERC post and unfortunately - although not really unexpectedly - there has been no release of an ESXi 7.0 compatible native driver for the H700 or LSI 2108 based array controllers in general.

Along with the brilliant feedback from the community (you guys rule

) even with the driver shenanigans, my initial hopes and dreams of LSI 2108 support in ESXi 7.0 where not to come to pass. Sure, it’s the way it goes, older hardware whilst still fully functional ends up obsolete purely due to lack of software support.

Yep, so I bit the bullet and invested in a H710 RAID adapter.

The plan being to get the H710 installed and running under ESXi 6.7 first and then upgrade to ESXi 7.0 later, once the H710 has settled in.

Looking through the Dell spec sheet, the H710 is based on the LSI SAS2208 chipset. Again, LSI being LSI, the SAS2208 chipset is used in many, many other array controllers. Here’s just a small selection of some of the more popular cards:

A more complete list of LSI SAS2208 based controllers is available on the Serve The Home Forums.

The H710 mini is designed to fit into a later 12th generation (PowerEdge Rx20) servers as can be seen from it’s proprietary connector: 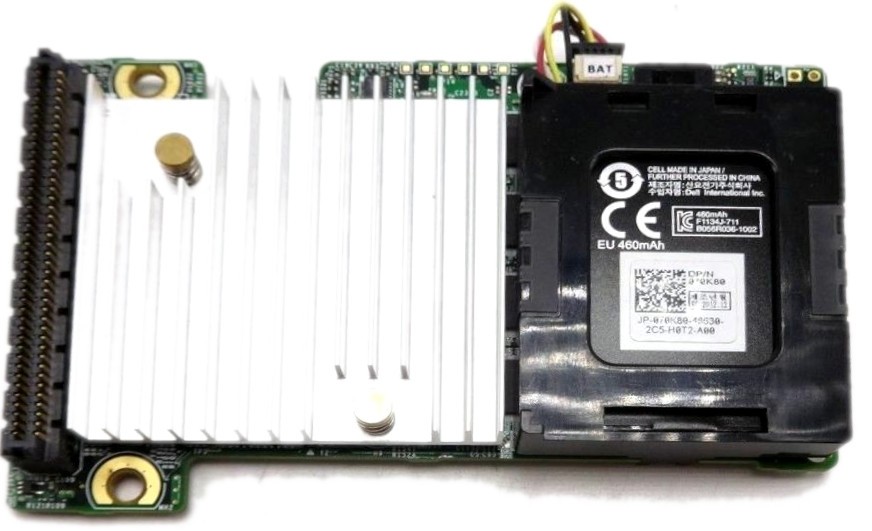 Where as the H710P adapter has a standard PCIe connector: 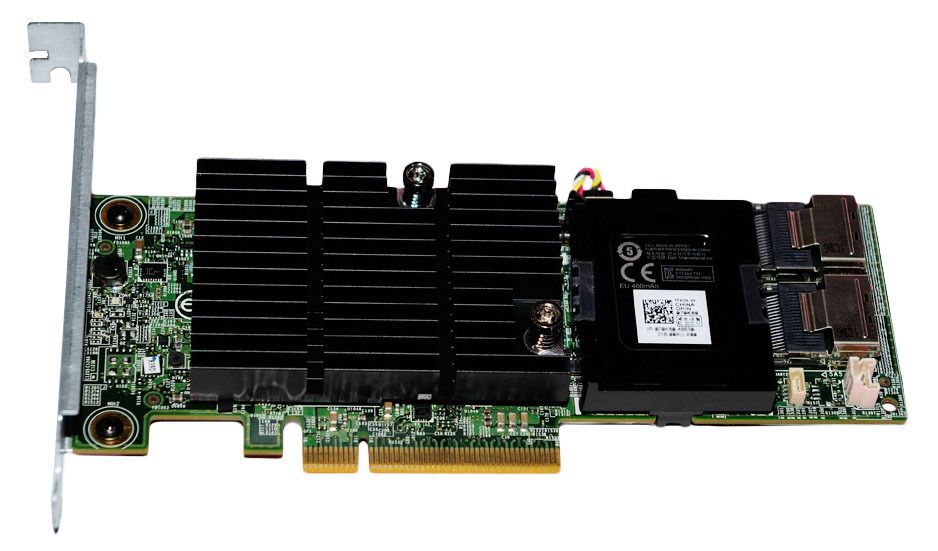 Luckily enough, I was able to pick up my H710P adapter on ebay from a UK seller for £50 including postage. Bargain!

As mentioned in a comment by Mike Vasquez (cheers Mike!) in an R710 server, the H700 cables work just fine with the H710. Yep they sure do: 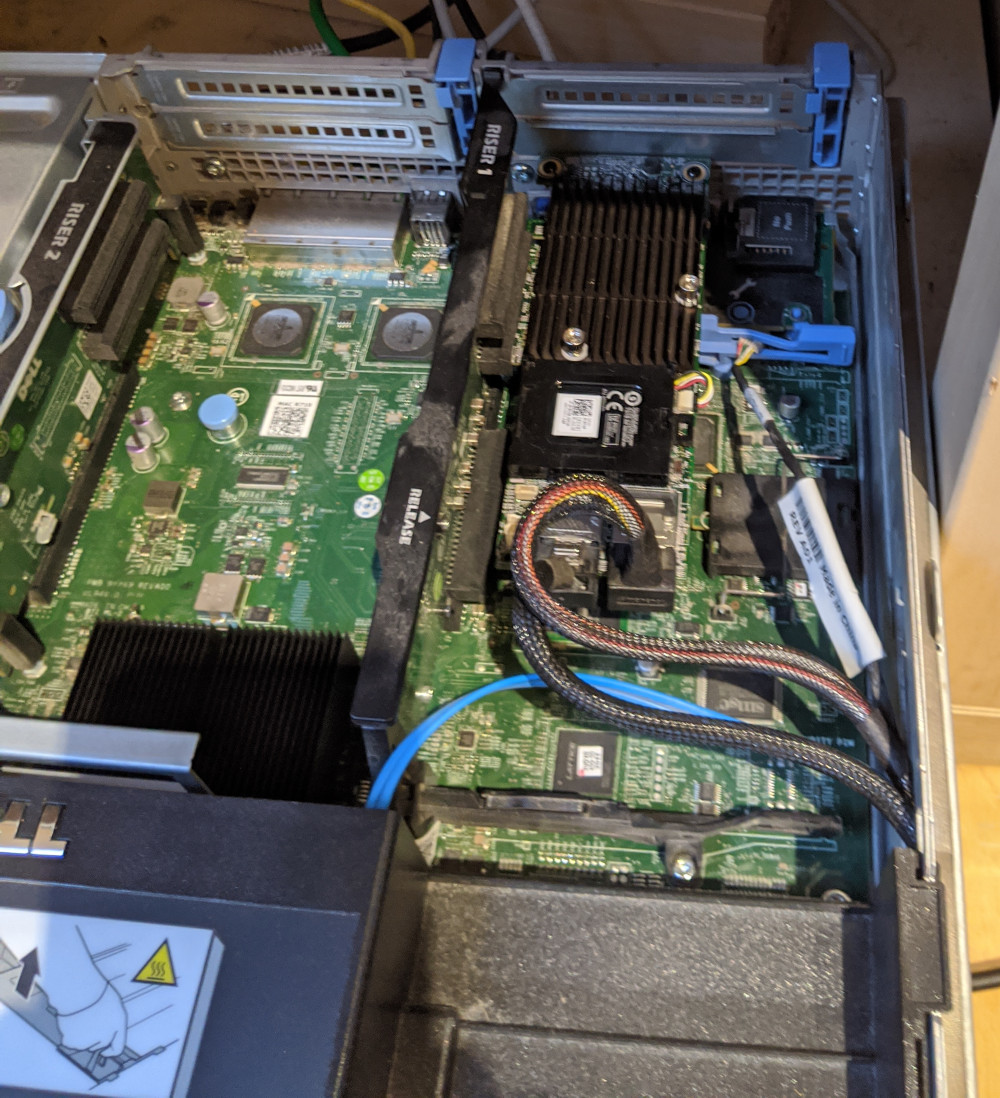 Checking the VMware Compatibility Guide for the H710 adapter, surprise upon surprise there is a separate ESXi 7.0 driver available!!! Check it out here.

Strangely the release notes for the driver talk about ESXi 6.5 support:

Having said that, I think I’ll stick with the “in box” lsi-mr3 ESXi 7.0 native driver.

…but I’m getting ahead of myself.

Let’s talk about the worrying part of all of this: is it possible to upgrade from a H700 to a H710 WITHOUT DATA LOSS?

Will an LSI 2208 controller read, accept and run with an array created by an LSI 2108 controller? Let’s find out!

Yep, I spent the best part of a day backing up all of my data. Finding out the hard way that such an upgrade is indeed not possible was at the forefront of my day spent preparing for the upgrade.

As the H710 array controller isn’t “an official option” for the PowerEdge R710 server, chances are that it won’t work in the R710’s dedicated storage adapter slot. I didn’t bother taking the time to find out, I simply plugged my H710 controller into PCI slot 2 as can be seen from the picture above.

Plug in the SAS cables and it’s job done.

Remember, the plan is to get the H710 installed and running under ESXi 6.7 first and then upgrade to ESXi 7.0 later, once the H710 has settled in. 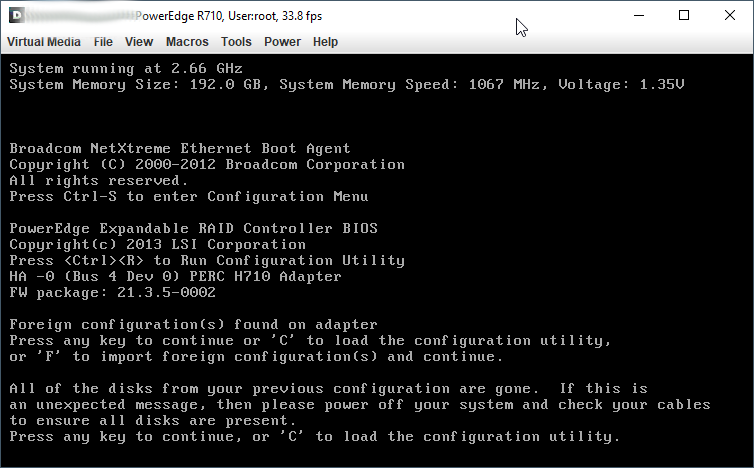 Lets quickly press F to import the foreign configuration (to the controller) from the disks: 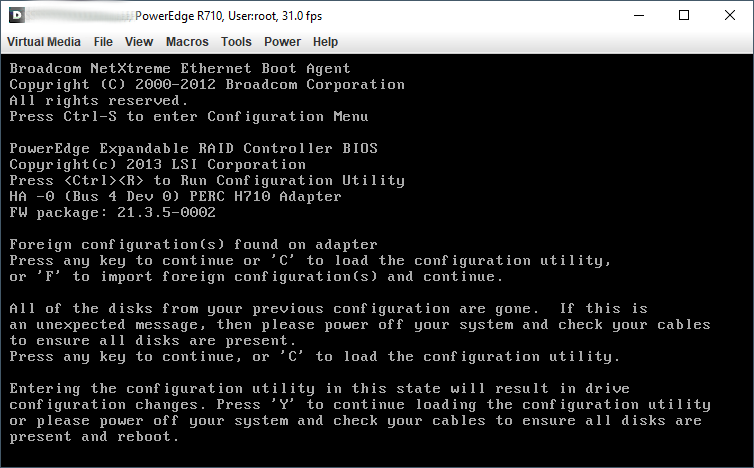 All of the disks from your previous configuration are gone

Lets hope it’s talking about the configuration on the controller…

Press Y to continue and make configuration changes and hold my breath: 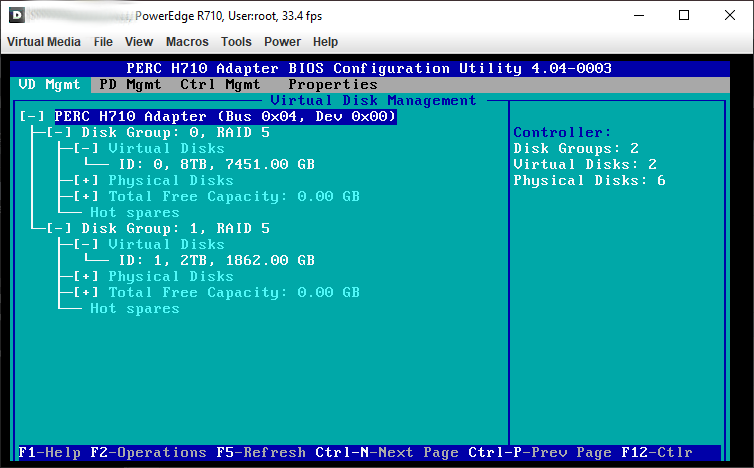 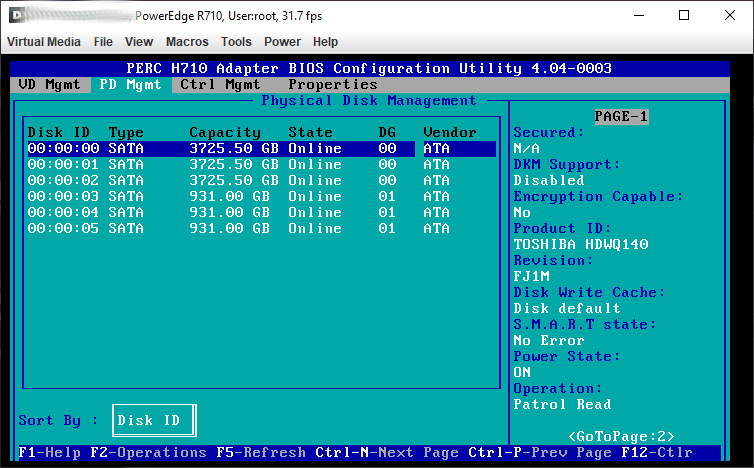 Controller BIOS is enabled. I’m booting from USB anyway, so not a big deal: 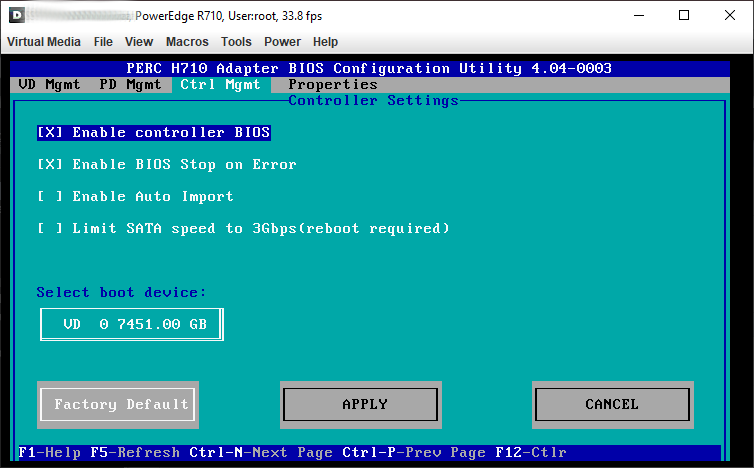 Yep, firmware up to date and card fitted into slot 2: 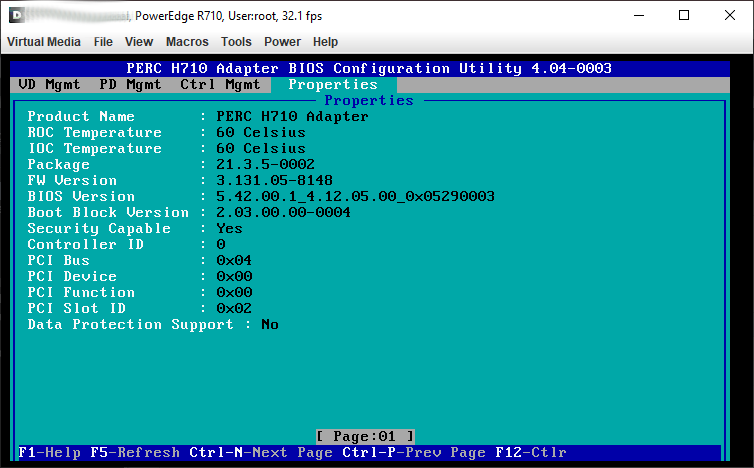 Let’s exit out of the H710 configuration utility and continue to boot back into ESXi 6.7: 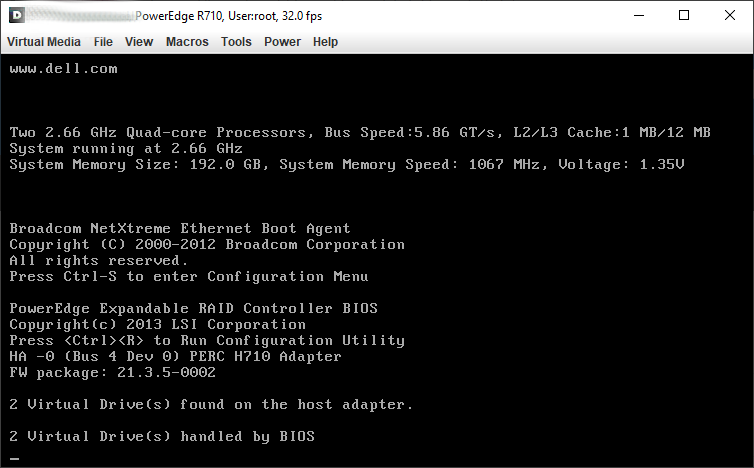 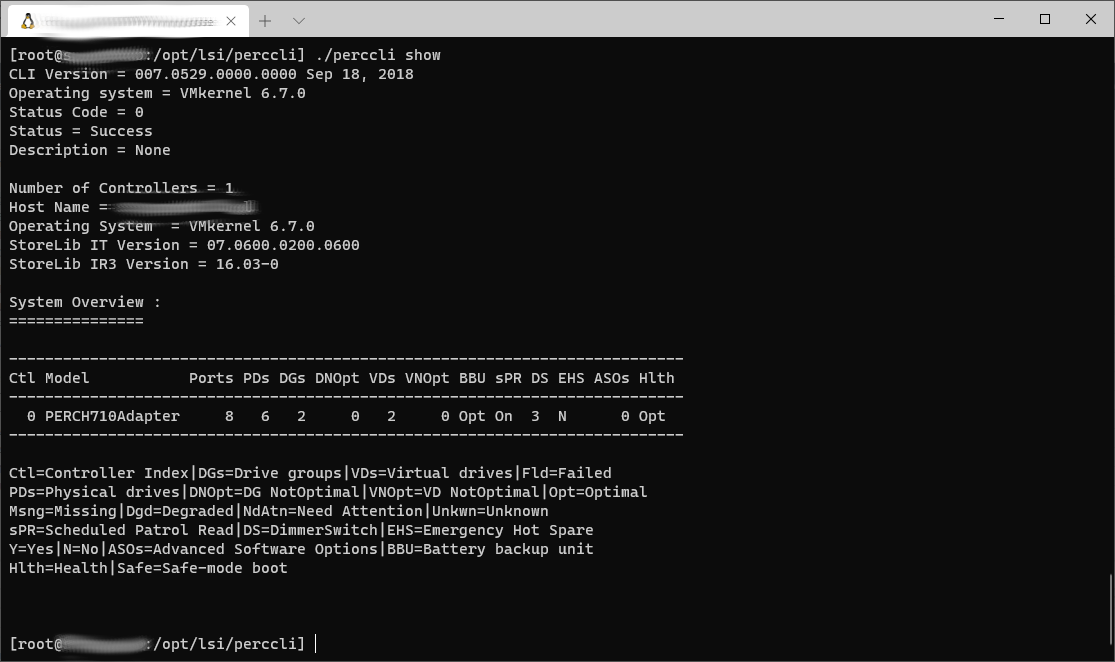 Finally, checking via Dell OpenManage, looks like the array controller is re-initialising the arrays in the background:

Lets bring all of the VMs back online and leave the background initialisation to continue in the er, background.

All in all, it took just under 12 hours to finish the background initialisation of both RAID5 sets.

So there we have it. From this we have learned that:

Potentially you could cross vendors too - say replace an Lenovo / IBM ServeRAID M5015 with a Intel RS25DB080… well, you get my drift.

Anyway, I’ll let this settle in a little further after which it’s ESXi 7.0 time. Don’t worry, rest assured, I’ll post here when I complete the upgrade.