Regular readers will have noticed that one of the countdown timers on this blog (they are gone now) was to the latest Ubuntu release - version 9.10 aka "Karmic Koala".

The Ubuntu developer team deliver two releases of Ubuntu per year.  One release in April (the year.04 release) and one in October (the year.10 release).  This makes the version released on 27 October version 9.10.

As you can probably guess, I'm a bit of a Linux fan.  It all started with Ubuntu.

If you are a "Linux Virgin" and are completely baffled as to which of the seeming endless Linux distributions is for you then I whole heartedly recommend you start with Ubuntu.

I've been using Ubuntu on and off since 2007 and upon installation (on the same laptops each time), each release has had something that has caused me some level of head scratching and some degree of Ubuntu forum bashing.  Whilst this is fine for someone like me who wants to understand the workings of Linux, this doesn't make it all that suitable for the average user who wants to 'install and go'.

However - at the risk of sounding like a gushy Linux convert (I'm not) - there was none of that post installation troubleshooting with Ubuntu version 9.10.  This latest version really is the easiest install I've ever done.

If you are interested in Linux, I whole heartedly recommend you try Ubuntu 9.10!


So, here goes with my own personal guide to installing Ubuntu.  What makes this different from the other 1001 Ubuntu installation guides out there?  Well to be honest, nothing.  My motivation here is to:
So lets crack on.

CD Download and Burning
I'm not going to cover old ground here.  Instead here are some links detailing my recommendations.  I strongly advise you follow all the steps in this section as it is guaranteed to save you problems later on.
Installation
So you've got the CD, it's verified a good 'un and your ready to go.
OK, here is what I recommend you do next:
Notes from the video:
Post Installation Add-ons
So you've got your Ubuntu installed and it's [hopefully] looking good.

As you can see, Ubuntu installs lots and lots of software 'off the bat'; Open Office, Firefox, Evolution email, Empathy instant messenger to name just a few.

Quick Note - Installing packages:
Linux applications are sometimes referred to as packages.  In my experience, when it comes to Linux software, the two terms are interchangeable.

There are three ways to install packages in Ubuntu: 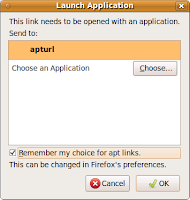 Updates
The Ubuntu developer team are releasing updates all the time, so before we do anything else, lets get fully up to date. Open a terminal window (Applications - Accessories - Terminal) and paste in the following command:

Once you are returned to the $ prompt, run:

and answer 'Y' to the install question.

Now that's done, we can move on to installing some additional applications.

Restricted Extras
Put simply, this is a load of additional software Ubuntu aren't allowed to include in the distribution iso file we downloaded earlier. 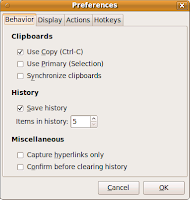 Ubuntu has an annoying habit of clearing the native clipboard if the source window is closed before you complete the paste part of a cut and paste operation.

Luckily we can use a replacement clipboard manager to get around this issue.

Simply the best open source media player there is.  Will play virtually any kind of media you can throw at it.  Especially good when it comes to Internet Radio. 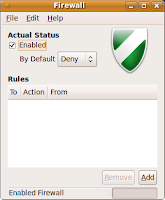 Not strictly needed, but worth having anyway.

The simplest Firewall application I've found is the Uncomplicated Firewall GUI.  A nice easy to use GUI interface to the very complex Linux firewall.

Or click here to install the Uncomplicated Firewall GUI.


Backup - Back In Time

Backups. We miss them when we don't have them!  For simplicity again, I recommend Back In Time.

Install or use the following command:

Or click here to install Back In Time backup.

Launch from Applications - System Tools - Back In Time 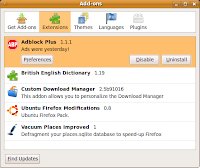 OK, strictly not just for Ubuntu, but here is the list anyway:

- Addblock Plus and Filters
- British English Dictionary
- Custom Download Manager
- Vacuum Places Improved
- ProCon Latte Parental Control If the machine is going to be used by the kids.

I'm sure the there are more, but that's enough to be getting on with!

Ever wondered what that bright star is in the sky?  How about trying to spot the Milky Way?  Then Stellarium is for you.

Just browse games and install from there. Simple!

Now it's over to you to start using and customising your install further.  The Linux world is you oyster!

Other packages to look out for are:


If you are really stuck, then try 100 of the best (useful) Opensource Applications

Looking at the Synaptic package manager as I write this, it has a total of 28,835 packages available for install.  That should keep you entertained for a while....