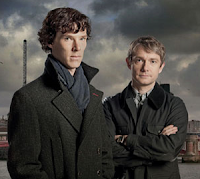 Having finally got around to watching the first episode tonight, and unaccustomed as I am for posting about TV shows on this here Blog, I feel compelled to stick a quick post up about the new three part BBC mini series Sherlock

Refreshing to see a bit of good old fashioned deduction rather than over reliance on forensics or cold case based crime drama.

As is often these days, with 1001 TV channels all pushing increasing amounts of drivel (Wife Swap / Eastenders / Hollyoaks, I'm talking to YOU), it's increasingly difficault to find any diamonds in this seemingly ever increasing river of *ahem* brown stuff.

When a diamond does pop up, it should be widely applauded.

Sure if I really really had to find issue, the plot could have been stronger, but don't forget there's a lot of ground to cover in the first episode even before Holmes and Watson get out to start solving crimes.

I stronly urge you to catch part one on BBC iPlayer.  You won't be disappointed.