Monopoly - Not what it was or mistaken identity? 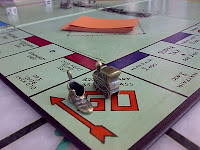 And so it came to pass.

Having lent our old Monopoly game many years ago and not got it back, it was time to purchase a new game.  The idea being; lets introduce the children to the world of Monopoly.  Its Christmas and board games are traditional in the downtime between Christmas and New Year.

At the very least it will help the children with their maths and may start to help them understand the value of money.

All very admirable you may think.  Yes I guess it was.

That was until we started playing and rule memories / strange-ties started surfacing.  It turns out that both Mrs  H. and I remember different additional rules not present in the rule book of our 2009 edition.  Namely:
Now is this the case of mistaken memory?

Or is it the "dumbing down" of a classic?

Sure a quick Google would solve all of this, but where's the fun in that?